What Is An Idiom? With a Common English Idioms PDF.

We've collated the 50 idioms you should know and provided an English idioms PDF for you to download for free. Get English Idioms PDF 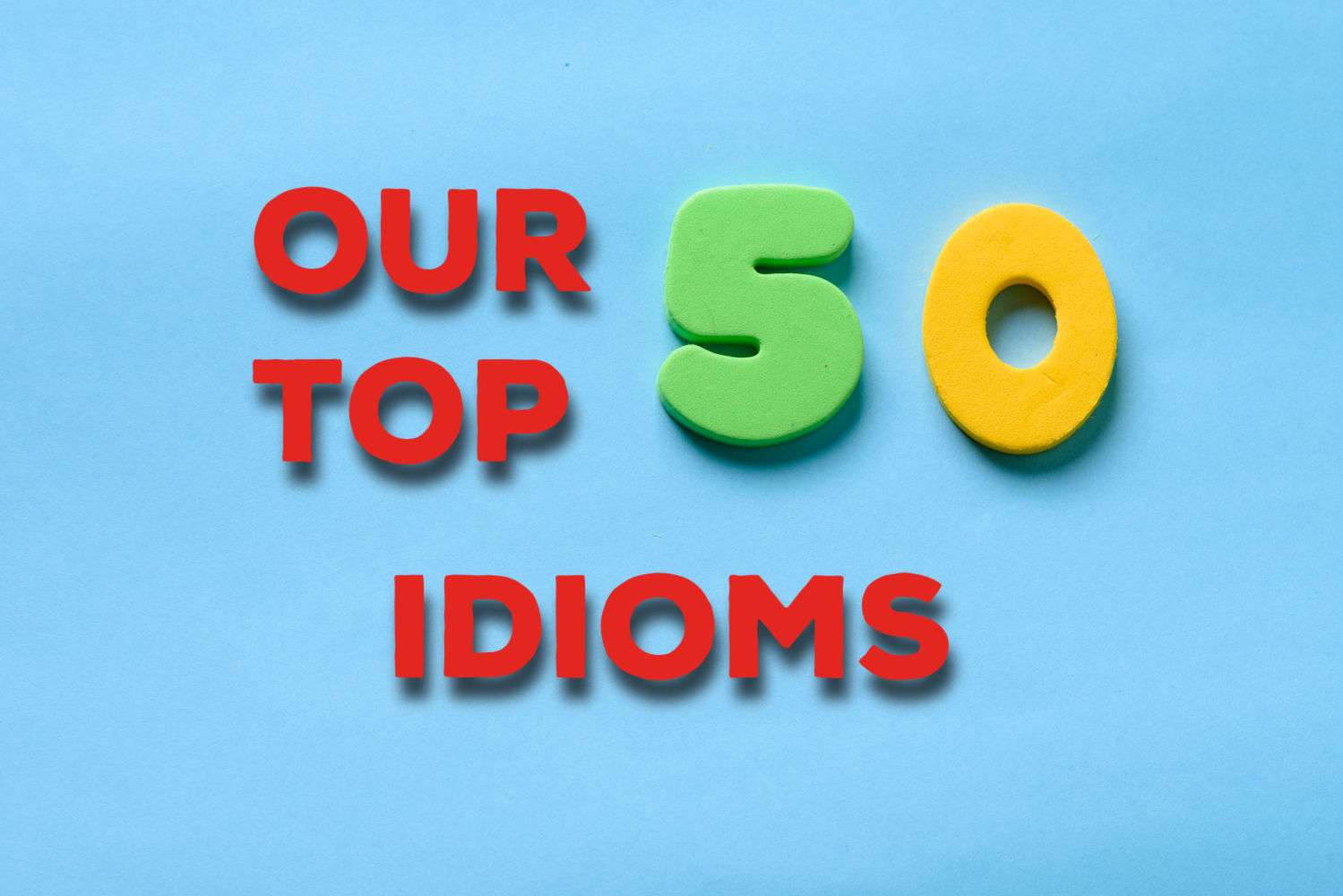 Advanced answer: An idiom is a phrase or expression using figurative language.  An idiom’s meaning is not necessarily linked to the words contained in the phrase, but rather, due to its common use over time, has taken on its own meaning as a stand-alone phrase.  Some idioms remain close to the literal meaning of the phrase, but become a commonly used expression in a certain circumstance.  Often, idioms originate from an original, literal phrase related to a common circumstance – e.g. bite the bullet – but which may be a more unusual or unlikely circumstance today.  ‘Bite the bullet’ remains a popular phrase and is now used in a broader range of circumstances than its archaic origins.  In other examples, the origin of the phrase was deliberately figurative – such as ‘break a leg’.  In this case, the idiom was created to avoid the superstition of giving bad luck to an actor.

What is figurative language?

Literal language is the direct translation, the exact meaning of the words used.  E.g. Fred sat down.  This ‘literally’ means that Fred. Sat. Down.

Figurative language such as idioms, metaphors and similes, is the use of words and ideas to make a point or suggest a meaning that is different or goes beyond, that of the exact (or literal) meaning of the words used.  Figurative language, uses ‘figures of speech’ to give colour to the point that the speaker or writer is trying to make, often trying to create an image in the mind of the listener.

What is the difference between an idiom, a metaphor and a simile? Why are idioms important for ESL learners?

If you are an English as a Second Language learner, idioms are a more advanced part of the language which are important to master if you are looking to use English at a higher level and sound confident and natural in your communication.  It is often said that idioms are necessary to sound like a native speaker.  While that is true in part, they are not essential to necessarily use, but certainly, they are important to be familiar with as native English speakers use them regularly.  We have already seen, as a part of figurative language, they are difficult to understand without already knowing what they mean.  Therefore, even if you don’t use them, you should try to get familiar with them to aid your listening and conversation skills.

Are idioms formal or informal?

Neither.  Idioms are a normal part of language and can be used in any situation.  Some idioms are certainly inappropriate for some situations, however, business is full of idioms e.g. ‘raise the bar’, ‘get ahead of the curve’, etc.

How do you use idioms properly?

For ESL students, using idioms properly is the biggest challenge.  If you use an idiom that is not very common or is delivered incorrectly, it can sound forced and unnatural.  As an ESL speaker, your goal should be to speak in a clear and confident way that makes the listener listen to WHAT you are saying rather than HOW you are saying it.

Have you ever been engrossed in a film and then suddenly you are snapped out of it thinking ‘hang on, that’s not right’.  Well using an idiom badly will do the same thing with a listener.  Therefore, work out how to use simple, common idioms with fluency and grace.  We’ve included our favourite 10 common idiom examples below. How many idioms are there?

Wikipedia suggests that there are over 25,000 idiomatic expressions in the English language.  It’s worth noting, however, that some idioms are regional and these idioms would only be useful to the areas where they are common.  Like normal vocabulary, idioms can go out of date or become less culturally appropriate.  Therefore, our earlier advice for English language students holds true.  Learn a few idioms really well, rather than lots badly.

What is an example of an idiom?

If you are new to idioms, here are examples of our 10 most common idioms that you should know.  So if you’re still wondering ‘What is an idiom?’ these 10 idiom examples will help add some colour to the explanation.

9. Missed the boat – to miss an opportunity.  “I wanted to go to the concert but I missed the boat and now the tickets are sold out.”

10. By the skin of your teeth – only just achieved something.  “The team won that game by the skin of their teeth.”

What are the 20 idioms you should know?

If you’re ready for some more, here are another 10 idioms with examples:

13. On the fence – undecided.  “I’m still on the fence about who to vote for in the election.”

The 50 idioms you should know:

In case you wanted to push the boat out a bit more, here are another 30 idiom examples taking us to a list of 50 idioms.  Remember these, in our view, are the 50 most common idioms, with examples, so you should get confident using them before you learn others:

24. A dog’s dinner – a messy, badly organised situation or piece of work. “This contract is a real dog’s dinner.”

32. Rule of thumb – an approximate measure or guide.  “As a rule of thumb, I put in two spoons of water to one of flour.”

34. Skeletons in the closet – to have secrets.  “The new CEO looks polished but I’ve heard he has some skeletons in his closet.”

35. Egg on your face – to be embarrassed.  “The headteacher had egg on her face when the exam results came in and the school was in last place.”

38. Bite the bullet – to do something hard that has been put off.  “Sanjay, you have to bite the bullet and break up with your girlfriend.”

39. Butterflies in your stomach – to be nervous about something.  “Backstage, Noah had butterflies in his stomach about his performance.”

40. Call it a day – to stop or quit doing something.  “I’ve been trying to become an actor all my life and I think it’s about time to call it a day.”

41. Jump the gun – to take action too early.  “I jumped the gun and told them my salary expectations, I think they would have offered me more money if I didn’t say anything…”

42. Storm in a teacup – a lot of excitement or anger about something small.  “It was a huge argument at work last week but it turned out to be a storm in a teacup.”

44. On the ball – alert and intelligent.  “You’ll like the new recruit, she seems very on the ball.”

48. Pull the plug – to stop doing something.  “The director has pulled the plug on the show.  Everyone has to find other work now.”

49. Punching above your weight – engage in an activity or contest thought to be beyond your abilities, or date someone who is a lot more attractive than you.  “Freddy has started seeing Olivia, the gorgeous girl from work. I can’t believe it! He is really punching above his weight.”

Now complete the exercise below to test your knowledge of idioms

Now you know the answer to ‘What is an idiom?’ you can learn a few more in our other articles, with videos and exercises to help your learning:

You can download the Common English Idioms PDF for this lesson or get our super bundle of 140 English Grammar, Vocabulary and knowledge PDF here: 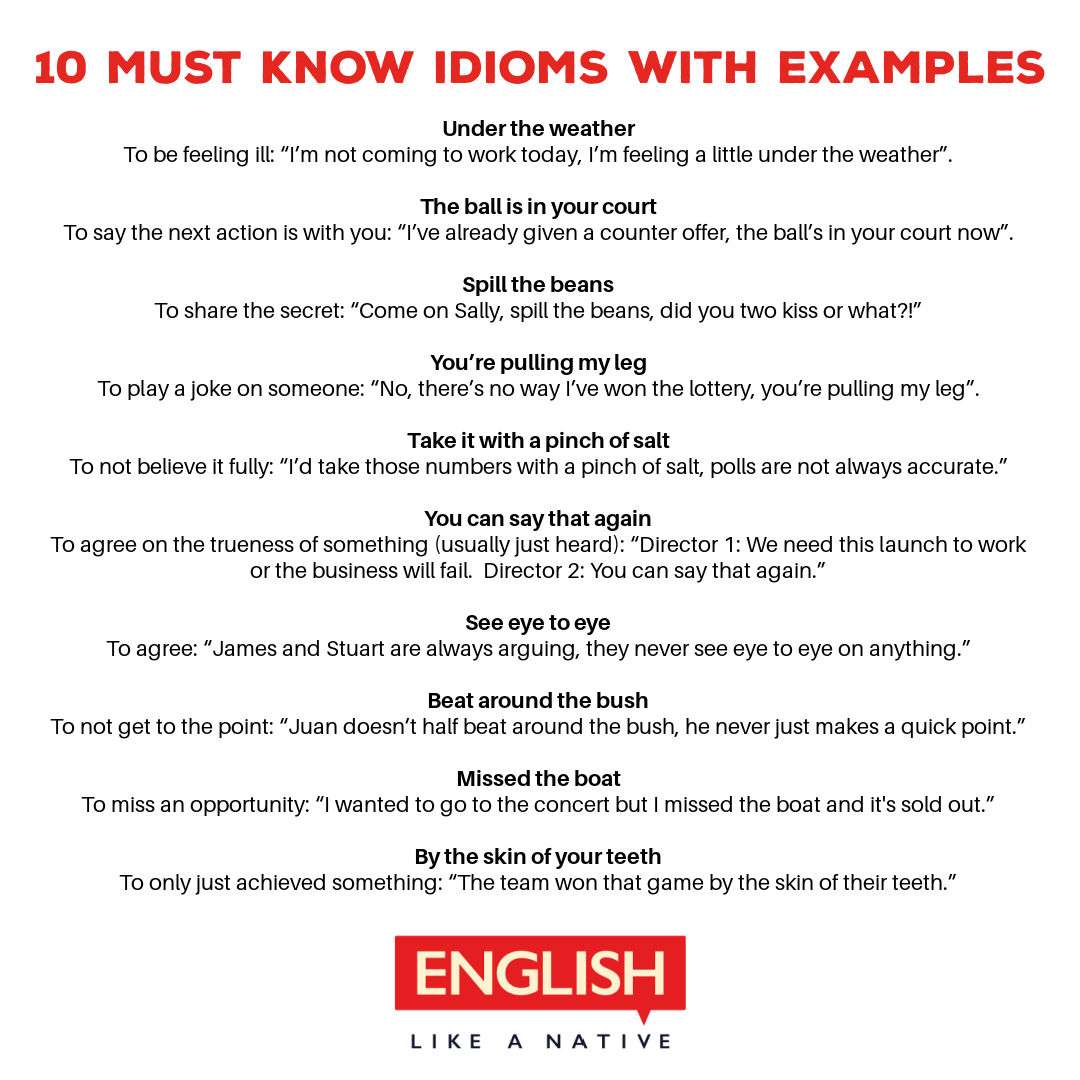 You have a rare opportunity to get your hands on over 100 PDFs to enjoy offline in your own time. This bundle is going for the bargain price of €33 (that's how much per PDF!?). Get a massive PDF with 36 pages of idioms + examples including:

I've just sent you an email!