30 Colour idioms and phrases with PDF

Colour idioms are a great way to expand your vocabulary and sound more natural when speaking English. See 30 colour sayings below and join our mailing list to get the free PDF. Get PDF 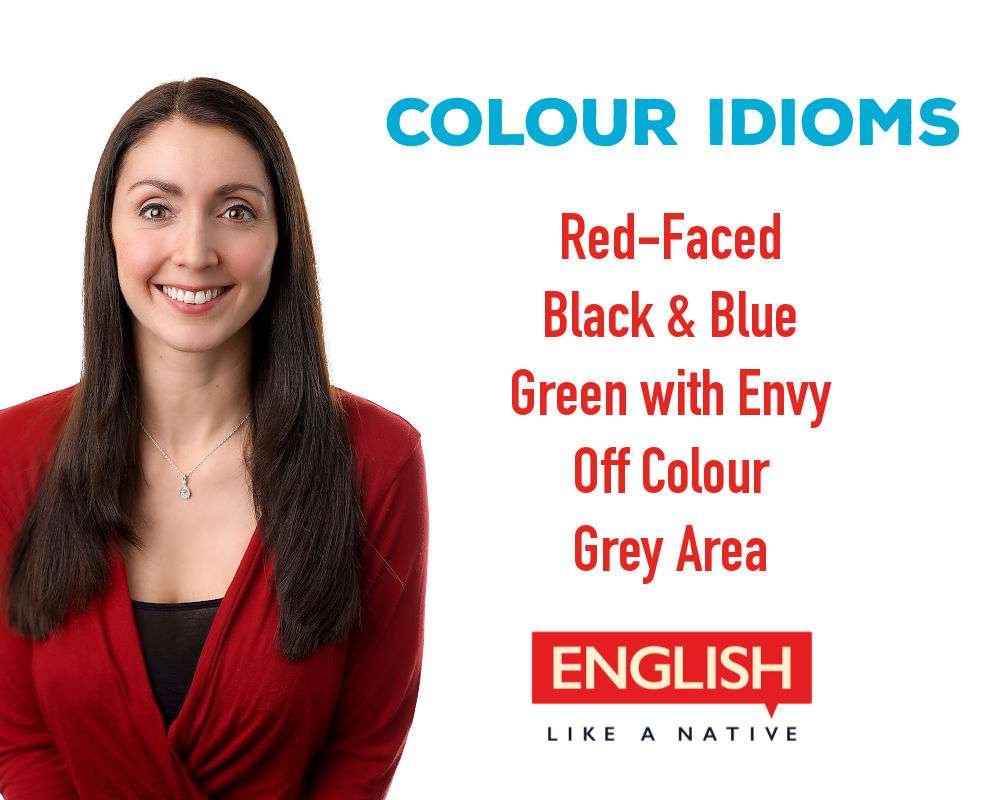 An idiom is a figure of speech that helps you to describe a situation without using the literal vocabulary.  It’s a great way to add colour and interest to your language and to sound more natural when speaking English.  You can find out more in our article: What is an idiom? Where you can also see our 50 most common idioms and download the pdf.

Get the colour idioms PDF

Below you can see two videos about colour idioms with examples and meanings.  You can also download a colour idioms PDF by subscribing to our mailing list here.  If you would like more colour idiom PDFs as well as many other idiom PDFs, English Grammar PDFs, Phrasal Verb PDFs and many more, you can get our Bundle of 140 PDFs for English language learners below.

Idioms come in all shapes and sizes and you can find more English courses online on idioms about animals, hard work, and time by following the links or going to our blog.  This English lesson is about idioms related to colours.  These colour sayings will help brighten up your language but be careful!  Using colour phrases and idioms out of context will make your English speaking sound unnatural.  So choose some of your favourites from this list and work on using them in the right context.

Are all colour sayings idioms?

In short, no.  Not all colour sayings are idioms.  But many are.  Many of the most familiar colour sayings are colour idioms, however, many are not.  For example, ‘Love is like a red, red rose’ is a famous colour saying that is a simile.  The similarity here is that both similes and idioms are examples of figurative language.

A list of 10 colour idioms to describe people with examples

To be embarrassed: She was left red-faced after the wind blew her skirt up.

Covered in bruises: Tyson was black and blue after his epic title fight.

A person who doesn’t fit in very well: Dave is the black sheep of the family, we haven’t seen him for years after what happened.

Jealous: Oh, I was green with envy when she turned up in a brand new car.

Are you okay?  You’re looking a little blue.

To find something very funny: The show was wonderful, I was tickled pink! Just what I needed.

White as a ghost

Pale in the face, or shocked or ill: James, you must sit down, you’re as white as a ghost!

Good with plants: I’m not very green-fingered.  All my plants die.  Even the fake ones!

Unwell: I went to see mum today, she didn’t look well, she was very off colour.

Kept in the dark

Uninformed: Seriously, Terry, you can’t keep me in the dark about this sort of thing, it’s not fair! 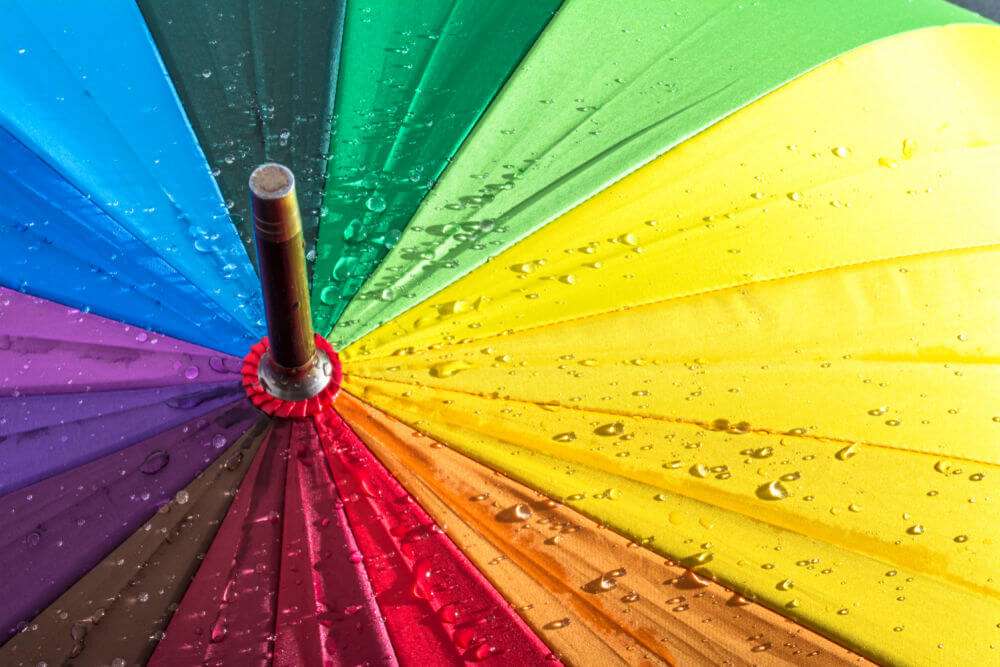 Okay, you caught me red-handed.  When I said these are MUST know colour idioms, that wasn’t strictly true.  However, these colour phrases will definitely help you in conversational English.  Now I know this video is a bit out of the blue but you now have a golden opportunity to learn all about colour idioms with me.  You can watch the below video on 20 colour idioms including examples and a test.  You can also find the colour idioms PDF for this lesson included in the PDF Bundle below.   I hope you enjoy learning about these fun colour sayings.

To catch someone red-handed

To discover someone in the act of doing something wrong.

News anchor: ‘The police caught the jewel thief red-handed deep in the shop’s vault, holding over £1m of jewels’.

An ill-defined (unclear) situation that does not have a clear answer or outcome.

The legal battle is centred on a grey area, neither party is able to provide conclusive evidence that proves their point.

This is very black or white, she either did or she did not eat your cake, you can’t say maybe!

To give the green light

The MD has given the green light for the launch of the new product in August.

To be in debt or at a loss

The company’s finances were in the red for months before they declared bankruptcy.

Once in a blue moon

For example, ‘we go on holiday once in a blue moon. Not never, but not very often at all’.

Out of the blue

The knockout punch came out of the blue and struck him on the side of the jaw.

Formal rules, processes, or boundaries that prevent or slow down something you are trying to achieve.

It took ages to get a working visa because of all the red tape you have to get through.

To look at something with an unrealistic or unfairly positive bias, perhaps only seeing or paying attention to the good things.

‘I have lots of fond memories of school and can’t remember the bad parts. I suppose I look back at it through rose-tinted glasses’.

To reveal the kind of person you really are (either positively or negatively).

Positive example: ‘Nicola was so patient with the children. She really showed her true colours’.

An excellent chance to do something that is likely to be successful or rewarding.

‘You’ve made it into Oxford University, son, the first person to go to university in our whole family.  This is your golden opportunity to make a life for yourself’.

A small and/or unimportant lie that avoids hurting another person.

‘It was a bit of a white lie. I told her I couldn’t go to her party but really I just didn’t want to’.

To pass with flying colours

‘Wow, you scored 100%, you really passed with flying colours’.

‘When I realised he’d been lying, I saw red, I couldn’t control myself and I went mad!’

Refers to people who work in manual labour such as agriculture, manufacturing and construction.

Blue-collar workers suffered the most in the pandemic as they cannot work from home.

Refers to an office worker and management positions.

White-collar work life changed forever during the pandemic as working from home became the norm.

The fact that no one seemed to enjoy working there was a red flag to the recruiter. 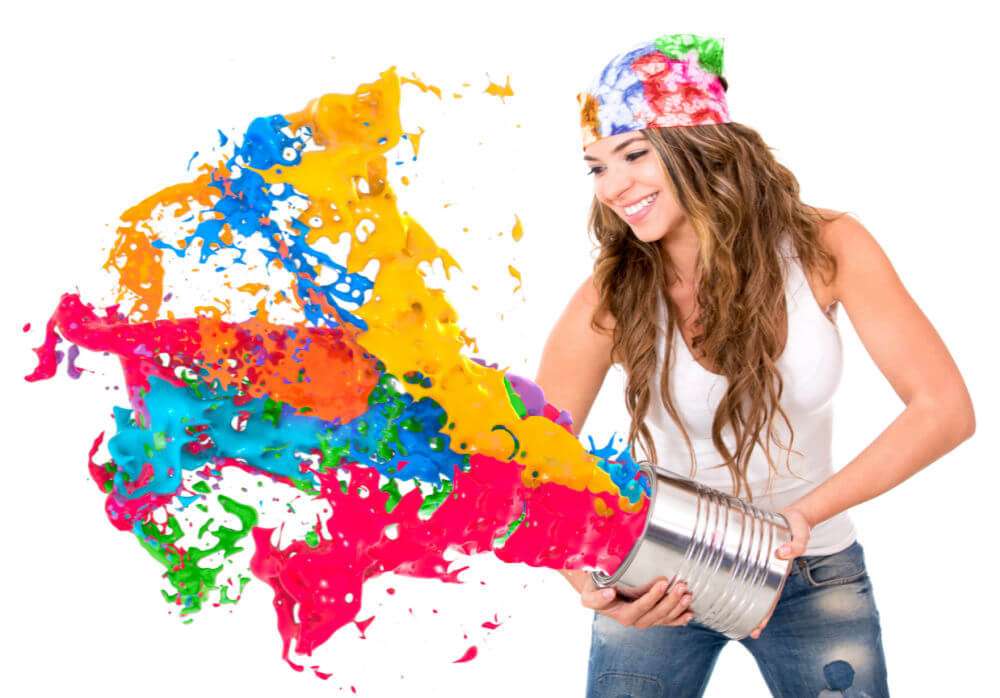 A special or memorable occasion.

When Francesca returns from her 2-year trip, it’ll be a red-letter day for her parents.

To paint the town red

To party or celebrate in a rowdy or wild manner, particularly in a public place.

“If you get that promotion we’ll paint the town red!’

To roll out the red carpet

To welcome someone with special treatment, especially when they arrive.

‘When she gets home from her travels, we’ll roll out the red carpet so she knows how much we’ve missed her’.

To provide special and important treatment throughout their visit.

At this hotel, we give all of our guests the red-carpet treatment.

So there we have 20 colour idioms we use conversationally in the English language. Here’s a challenge to test your new knowledge. How many of these colour sayings can you fit into one paragraph? Why not try writing it out now!

If you found this lesson helpful, you can get the PDF supporting both videos in our bundle of 140 PDFs for English learners below.   If you’d like to learn more about idioms, you can see our other lesson on Common Idioms, Time Idioms, Weather Idioms, Money Idioms, Hard Work Idioms, and Animal Idioms.

Want to improve your English?  Find out more about our 5 star English courses.

Black and white: Refers to something that has two, clearly defined sides or options.

‘The US election result was black and white, it was clear cut, the president lost her reelection bid’. 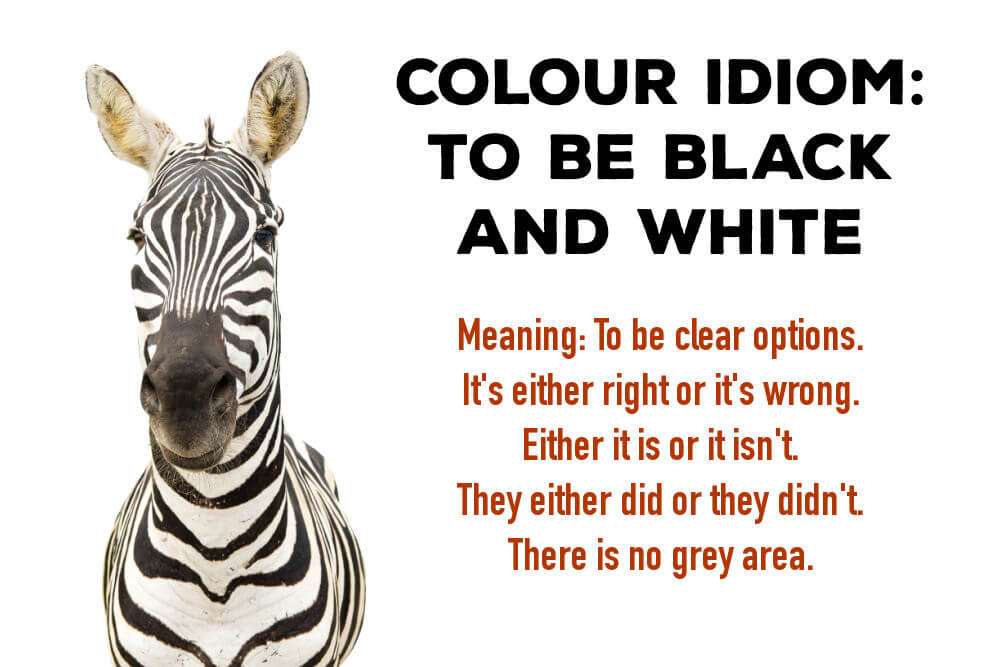 You have a rare opportunity to get your hands on over 100 PDFs to enjoy offline in your own time. This bundle is going for the bargain price of £27 (that's how much per PDF!?).